First, the basic wikipedia page on Gretna. Interesting fact: Gretna is not "all white" or even "almost all white" it is 56% white.

Second, this map, from google. (Click for larger image.) 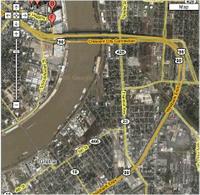 The "B" points to the Convention Center. The big bridge labeled "crescent city connection" is the one that was blocked. As you can see, it leads to a highway that goes over Gretna and on to other neighborhoods, showing that able-bodied and non-threatening individuals could have simply been allowed to walk through Gretna. They also could have assisted more feeble people in making the journey. Later I hope to locate the bus station and mall the mayor described to me.

Finally, this is an attack page on Gretna. They allege that multiple shots were fired by several white cops, that the gunfire scared off rescue personnel, and that the police actively raided and broke up refugee camps. I haven't read the whole thing to see what evidence they have for these accusations.
Posted by Rob Helpy-Chalk at 9:59 AM