Via Colin M on Facebook.
Posted by Rob Helpy-Chalk at 11:56 AM No comments:

"Song number one is not a fuck you song" --Fugazi

But if you are going to sing a fuck you song, this is the one.
Posted by Rob Helpy-Chalk at 12:32 AM 1 comment:

No booe's are e lawd but rob is u lawd 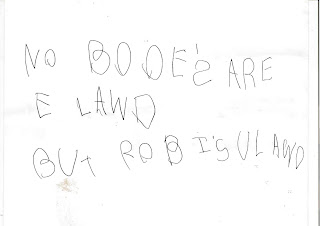 One of the largest ___ graveyard

One of the largest ship graveyards: the bay of Nouadhibou

The whole site is full of pictures of abandoned industry. Its amazing.

Update: OMG check out the pictures of the boats abandoned in the retreat of the Aral Sea.
Posted by Rob Helpy-Chalk at 11:40 PM 3 comments:

For the sake of contrast:

A couple of years ago, my neighbor locked herself out and figured she could save the locksmith charge if she could get to an unlocked door on her second floor porch. A Cambridge police officer happened by and helped us carry an extension ladder across the street from my garage. He even held the ladder steady while my nimble neighbor ascended to the porch. The police officer never asked two laughing Caucasian women to prove we were not burglars.

The rest of the article, by someone who has dealt with police misconduct cases, discusses in detail about what was screwy in the way Sgt. James Crowley treated Skip Gates
Posted by Rob Helpy-Chalk at 4:49 PM No comments:

There, I Fixed it.
Posted by Rob Helpy-Chalk at 9:57 AM No comments:

There are a lot of problems with locally produced food. Peter Singer has a good argument that supporting agriculture in the developing world is just as important as reducing carbon footprint. He also points out that transporting cargo by ship is much much more efficient than transporting by truck. But broad, almost data free, arguments like Dunning's just don't cut it.

In general, calculations of environmental impact are incredibly complex, and the rhetoric of skepticism really doesn't work here. Skeptics and debunkers always frame debates as cases of reason vs. superstition. The tone is "I'm rational, and you're not." But environmental debates are generally not cases of reason vs superstition, but conflicting ways of calculating costs and assessing risks. If one person uses a model that only takes GDP to be a basic good, while another person tries to include, say, the rights and interests of non-human animals, neither side is being irrational. They are using different frame works with different assumptions about value.
Posted by Rob Helpy-Chalk at 3:17 PM 3 comments:

Which is why I'm building a fence across the middle of my neighbors' yard and putting up a security checkpoint in their living room!

The ad. The explanation.
Posted by Rob Helpy-Chalk at 1:49 PM No comments: A pile of leaves from our garden. Posted by Rob Helpy-Chalk at 3:41 PM No comments: