So far I've been avoiding researching the situation with illegal immigrants and health care, even though every time I teach medical ethics, I have students claim that it is unfair that they have to pay for health care while those illegal immigrants get it for free. This year I'm going to deal with, though, because I have a couple very intelligent, hardworking students writing papers on it, one with personal experience on the subject.

So I've just tried to get people to be more specific about what federal programs they are actually talking about. My thought was that this would deflate hysterical rhetoric of the "OMG those lazy, coddled immigrants get free everything, like health care, and pie!" sort. The problem with this tactic is that the law here is simply a mess. We are dealing with two of the most incoherent, contradictory legal areas in the US: health care payments and immigration. If you could find a way to throw in the tax code, you would have a federal gibberish trifecta.

This might wind up as a case of justice vs. compassion, at least if you read all arguments with maximum charity, which would be interesting.
Posted by Rob Helpy-Chalk at 11:53 AM No comments: Links to this post

The Opposite of Mother is not Father, Dammit.

One of Caroline's activity books asserts that the opposite of "mother" is "father." Actually, a lot of children's books and toys make mistakes like that. If two things are commonly paired, the designer of the product thinks they are opposites. So salt and pepper are opposites. I've emphasized to Caroline that these people are simply wrong. To be opposites, the member of a pair must cancel each other out. Still, I'm particularly galled by idea that the *opposite* of "mother" is "father."
Posted by Rob Helpy-Chalk at 10:08 AM 2 comments: Links to this post

wants to posit that there is an intellectual movement that should be called "Scoobie-Doo Realism." People take up a stance of Scoobie-Doo Realism when they pose as hard nosed advocates of science and objectivity, because they can unmask a traditionally mysterious figure. This despite the fact that their own explanations make no sense and they hang out with a talking dog.
Posted by Rob Helpy-Chalk at 9:25 AM 2 comments: Links to this post

The industry professionals at The Oil Drum suspect that the real leak in the Deepwater Horizon site is not at the blowout preventer, but 1,000 feet below the sea floor. BP may have even been trying to increase the flow at the sea floor to relieve pressure on the leak 1,000 feet below.

The post is full of technical industry talk (and rather badly edited) so it is hard for me to figure out exactly what they are saying, but there seem to be two further catastrophes to fear. Apparently the sea floor there is just silt that doesn't really provide any support for the blowout preventer. The preventer is just resting on the 1000 foot pipe beneath it, which now seems to be buckling. The other problem is that the sea floor itself might be opening up, causing the whole oil reserve to come to the surface at once. I'm not sure how this outcome is compatible with the worry about the pipe collapsing, since it seem to imply that the sea floor is a solid mass that can shatter, which they just said it wasn't. I'd like to see more explanations of this stuff.

Update: Prof. Goose from The Oil Drum has stopped by Unfogged to explain some things http://tinyurl.com/3xunewu. He points out that the article is by a TOD commenter, not a regular writer. Goose points to comments on The Oil Drum thread that undermine dougr's original post. A guy calling himself R2-3D points to other signs that would be present if there had been a casing blow out beneath the sea floor. Maybe we should leave this to the experts to debate before we reach higher levels of panic than we have currently.
Posted by Rob Helpy-Chalk at 11:41 AM No comments: Links to this post

End of the School Year

Every weekday this year, a small line of first graders (including Caroline) has formed on my front lawn, waiting to board the bus. Often one child's younger brother got in line too. He is around three and was inevitably wearing pajamas. He just wants to be like the big kids. His mom made sure he didn't actually get on the bus. School is over after today, and I will miss this little ritual.
Posted by Rob Helpy-Chalk at 9:14 AM No comments: Links to this post

Collateral damage in a defensive action against birds

The kids and I were picking strawberries to give to our neighbor for her birthday, when we found this guy, caught in the netting I had put up to keep out the robins. He had been still as the dead until I took one step closer than he liked, and he zipped away as far as the net would stretch. 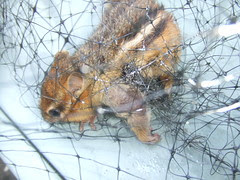 I was scared to handle him at first, thinking that he could carry disease and might scratch me, but it quickly became clear that he would not be able to get all four of his claws out of the net on his own. The weird thing is that once I got all his claws free, there was just a glob of netting attached to his side for no apparent reason. 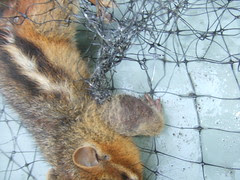 Also, he had rubbed a big patch of fur clean off from his shoulder trying to escape. 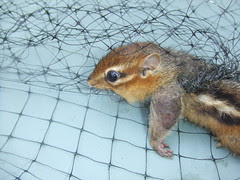 The only way to free him was to cut the glob of netting with scissors. Once free, he scurried into some PVC piping connected loosely to the downspout of the gutters of my house.

Some background. I've seen him in the garden before, sometimes scurrying into the PVC pipe, sometimes scrambling around the southwest corner of the garden, looking for a way out. Sometimes it looked like he did find a way out--the base of the fence consists simply of flagstones piled together, and there are plenty of chipmunk sized holes. The PVC pipe is another story. The downspout comes down at the corner of the house, which is adjacent to the northeast corner of the garden. It empties into this PVC pipe, which goes under the garden fence, one side sticking into the garden and one side sticking out. The pipe is a natural varmint highway, and up until now I have dealt with this problem with the simple expedient of putting a large rock on the sticking-out-of-the-garden side. But the rock is often moved and doesn't cover the hole right, so I am not surprised that it has still served as a direct route to my garden.

Ok, so the chipmunk is in the pipe and the kids having been briefly entertained by The Chipmunk Incident, are now asking to do something new and exciting. I am not satisfied with the situation, however. The 'munk is scared, cowering in the pipe, and may think to leave out the side that exits the garden, and might not. So, with the kids watching, I proceed to try to disinter the PVC pipe, slide it out from under the fence, and coax the chipmunk out. This is not entertaining to children, who whine and make escalating demands, including that I stop what I doing any play Uno. Finally, unable to take the pestering, I yell

which in retrospect, is kinda a weird thing to yell. In any case, it scares the kids off, and I am able to remove the pipe and clean it out. It turns out the whole thing is packed full of dirt and live roots. There is no way it would carry water, an issue which never came up, because the downspout and the gutter that feeds into it are also completely clogged. About halfway through the process of emptying the pipe, the 'munk scurries out and runs into a nearby evergreen bush. I imagine I will recognize him if I see him again, because he has a glob of net sticking out from his side. I should name him, but the only name that comes to me is "Leibniz" which I am not satisfied with. 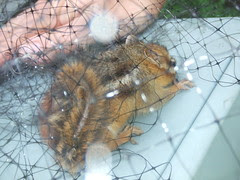 I am also worried that his wounds will mean his early demise. I can't figure for the life of me how the net got stuck to his side. Molly has suggested hopefully that Leibniz (for want of a better name) might have a mate who will help groom out the netting. But the whole thing still worries me.

I spent the remainder of the day restoring the PVC pipe to its proper place and fashioning grates at either end to be sure to keep all varmints out. I also took care that it was tipped so that, if the gutters of the house are ever repaired and actually empty water into the PVC pipe, it will be appropriately tipped so that the water pours into the garden, and not out of it. I even measured with a level.