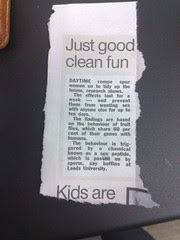 Be sure to click through to read the story. Remember, science reporting gets really bad, and this is the worst ever science reporting.
Worst science
Originally uploaded by perca fluviatilis.
Posted by Rob Helpy-Chalk at 2:26 PM 3 comments: Links to this post

My colleague Ben and a woman from the Ohio Farm Bureau have raised some interesting points about issue 2. I'd like to respond to them publicly because in order to clarify some misconceptions.
The Oversight Board Would Be Undemocratic
Ben points out (on Facebook) that in general, oversight boards are a good thing, and a board that overseas farm animal welfare could be good for animals. While this is true in general, it is not the kind of board we are looking at here. The goal of this board is explicitly to keep decision making about animal welfare in the hands of the agriculture industry, and not in the hands of voters, by making a change in the state constitution.
The vote Yes campaign is being run by Ohioans for Livestock Care. The flyer I have from them begins "Ohio farmers know best how to care for their flocks and herds." This tagline is repeated at in an announcement on the Ohio Farm Bureau website about a Yes on 2 rally. The content of the ballot issue is perfectly in line with this goal. Eleven out of the thirteen members of the commission would come from within some aspect of agriculture (farmers, farming organizations, deans from agricultural schools, etc.) There be one person representing consumers and one representing animal welfare, but the animal welfare representative cannot come from national organizations of animal activists. This last point is crucial, because the real aim of this ballot issue is to block efforts by the Humane Society of the US. (More on them soon.)
Now wait, you might ask, don't farmers know how best to treat their animals? Why shouldn't the oversight board be dominated by the farmers themselves. Well, well obviously farmers have first hand knowledge of the lives of their animals, but they do not have an interest in the welfare of those animals. Their interest is in maximizing profit, and this means raising veal, chickens and brooding sows in boxes so small the animal can't turn around. In order for everyone's interests to be honored, decisions made about animal welfare have to be made democratically, and include people who can speak for the animals.
Ballot Issue 2 is an amendment to the state constitution. It is fundamentally about taking power away from the legislature, power that it now has under the constitution, and giving it to industry.
The Oversight Board is Aimed at Blocking a Good Legislation.
Everyone involved in this debate admits that the driving force behind the issue is a recent California law that animals be kept in pens large enough to "to lie down, stand up, fully extend their limbs and turn around freely." The law was passed as a ballot initiative in California and was backed by the Humane Society of the US. Afterwards, the HSUS met with Ohio lawmakers to discuss bringing a version of it here. The lawmakers response was to immediately put issue 2 on the ballot, so that they would have the power to enact any such laws.
The California law effectively eliminates three industry practices. First of all it would eliminate veal crates. People who eat veal like the pale tender meat that comes from anemic calves. Starting in the 1950s, farmers have learned that they can produce a lot of this sort of meat by keeping calves in pens where they are unable to turn around, groom themselves, or lie down while extending their legs and feeding them a liquid diet of milk powder, vitamins and growth hormones. The only justification for doing this is the consumer's preference for pale, tender, anemic meat. Second, the law eliminates battery cages for egg laying hens. To maximize profit, hens are again raised in stacks of wire mesh cages, with each bird having an area about the size of a piece of paper to move around in. Again the only motive here is profit. The third practice, crates for brooding sows, is a little different. Pregnant pigs are generally kept in gestation crates because they are extremely ornery and likely to fight 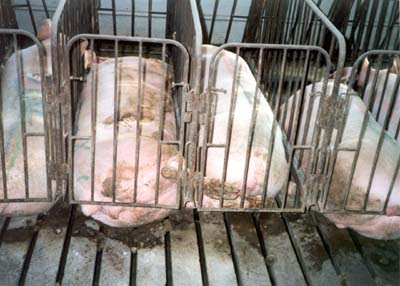 once the big gives birth, they are kept in farrowing crates like these, so the piglets can nurse while the mother remains immobile

here the worry is that the nursing pig would roll over on her young, or perhaps eat them. To my knowledge, though, there is no actual evidence that this happens. Furthermore, there is no evidence that any crazy behavior by the pig isn't actually brought by other aspects of their environment, like poor diet, lack of access to the outside, etc. Certainly in the wild, the pigs must be able to raise some of their offspring to adulthood. So again, we are left with little justification for treatment that creates incredible suffering.
The Personal Attacks
I originally got on to this issue because someone from the Ohio Farm Bureau left some flyers in support of Issue 2 at our office, along with a basket of fresh bell peppers. I sent around an email to the rest of the department about the issue, and shortly thereafter, the woman from the Farm Bureau wrote me back. The first thing she did in her email is attack the Humane Society of the United States, including sending a flyer about them produced by the food industry organization the Center for Consumer Freedom.1
Some of her complaints are reasonable. The name of the organization misleadingly implies that they run local animal shelters, when in fact most of their work is activism on the issue of farm animal welfare. Other attacks were false, including that the HSUS seeks to end all animal agriculture. From their policy statement: "The HSUS supports those farmers and ranchers who give proper care to their animals, act in accordance with the basic ethic of compassion to sentient creatures under their control, and practice and promote humane and environmentally sustainable agriculture." Still other complaints made by the woman from the Farm Bureau and the Center for Consumer Freedom are things I can't evaluate, like accusations that HSUS mismanaged charitable donations and has a spokesman for a terrorist organization on its board of executives.
Well, as a teacher of critical thinking, I am duty bound to remind you of the existence of the ad hominem fallacy. The moral character of the HSUS is simply not relevant to whether Issue 2 is a good constitutional amendment.2 Bad people can argue for good causes and good people can argue for bad causes.
Annoyingly, it looks like I'm going to be writing more on this in the future. Next up: finding my copy of Bernie Rollin's Farm Animal Welfare and researching the European laws on gestation & farrowing crates.
1. For the record, she sent me the flyer to correct an erroneous statistic about HSUS fundraising she had given in her first email. She didn't repeat the accusation of terrorism herself.
2 Although it is worth noting that The New York Times describes the HSUS as the "least radical" of all the animal rights groups.
Posted by Rob Helpy-Chalk at 1:42 PM 1 comment: Links to this post

Ohioans: Vote NO on Issue 2.

Issue 2 would create an industry dominated "animal care" council to set standards for farm animals in Ohio. The goal is to head off the state from passing anything like California's Prevention of Farm Animal Cruelty Act (which banned veal crates, gestation cages, and battery cages) by taking the power to regulate farm animal treatment away from the voters.
Read more here, here, and here.
The text of the issue is here. Notice that the board is supposed to include a member of a local humane society. This is specifically to keep the Humane Society of the United Sates out of the picture. The HSUS was instrumental in getting California to insist that farmers keep animals in cages large enough to turn around, and were considering promoting similar legislation here when the state legislature decided to put Issue 2 on the ballot.
Vote No on 2!
Posted by Rob Helpy-Chalk at 5:33 PM No comments: Links to this post